Black widow spiders are among the most venomous spiders in North America. Although many people are afraid of spiders, only a few species are able to deliver a poisonous bite to humans – black widows are among them. Still, their bites are rarely if ever fatal, especially to healthy adults, and it is only the female black widow spider that is capable of biting humans.

They’re notable for their distinctive red or orange hourglass-shaped markings on their underside. Their bodies are about the size of a pea, and they spin large, messy webs. Mostly solitary, except for when mating, black widow females are notorious for eating their mate after copulation – hence their name – although this does not occur every time.

You can find these spiders mostly in the South and the western United States. They mostly avoid human habitations and instead can be found in cool, dark places like garages, sheds, trash heaps, woodpiles, outdoor furniture, and basements. They’re mostly active at night, and despite their reputation are not aggressive, and will usually only bite if accidentally disturbed, especially when guarding their eggs.

There are roughly 2,500 incidences of black widow bites reported at American poison control centers per year. However, the majority of bites do not necessitate emergency care and can be treated at home.

You’ll notice swelling and redness at the site of the bite, and possibly see two fang marks. Other symptoms might include:

Most black widow bites are not life-threatening, and will only result in localized, moderate pain for a short while. If you’ve been bitten by a black widow, clean the affected area with soap and water. Both cold and warm compresses have been said to relieve symptoms, and some sources recommend elevating the area to prevent the spread of venom. Pain relievers such as acetaminophen or ibuprofen can also help.

If you’re experiencing more than minor pain, or you experience full-body symptoms, go to your nearest emergency room. Severe abdominal cramping or an ulcer at the site of the bite are also signs that you might want to seek emergency care.

Black widow bites won’t kill a healthy human adult but can be fatal to babies, children, or the elderly or infirm. If you experience severe symptoms, seek emergency care.

To eliminate black widows or other pests such as termites from your home, contact Mighty Mite Termite Services; we’re the go-to pest control service specializing in orange oil for termites and other guaranteed ways to reduce pests in your home. 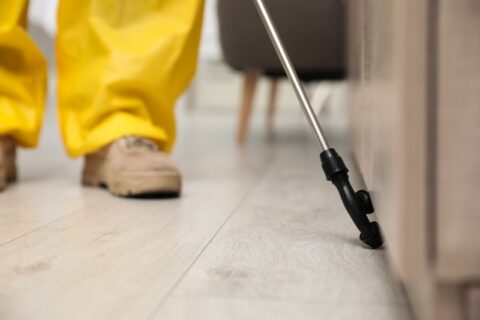 Tips From the Termite Professionals at MightyMite Termite
Home termite infestation in the Bay Area is not uncommon. Maybe you noticed some signs of…